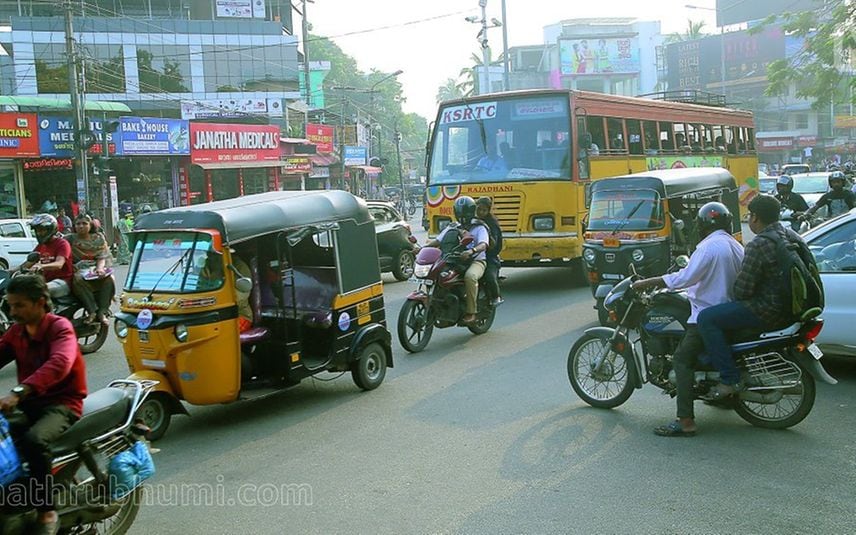 It was one of the bizarre moments one might come across.

This guy on a scooter, moving against the traffic flow, is coming directly against you on the footpath. You gesture in panic and anger. He slows down and says: “Why are you getting angry at me? I am not disturbing you at all.”

Even after violating all traffic rules, he is irritated that someone has objected to him ignoring road discipline. For him, riding on the footpath, that too on the wrong side of the road, is normal.

Welcome to the chaos on Kerala roads, which claims the lives of numerous pedestrians and motorists every year.

According to the police figures, 3,429 people died on our roads in 2021 and 1,686 of them were fatalities that occurred on roads other than national and state highways. The death figures also show that 2,640 happened purely due to human error.

In Kerala, which marvels as India’s most well-educated state, observing the rules of driving is almost unknown. Everyone is always in a rush. The common practice among drivers and riders is to force their way through speedily, even on routine commutes.

God help you if your vehicle is a second or two late to start moving when the light turns green: the total cacophony of horns of the impatient drivers behind will virtually blast you out of the way.

Speed is the overpowering obsession, without them realising that the chaos they cause in the race to their destination will make the travel time longer. Getting from point A to B at the quickest possible time is the aim; not getting to the destination safely in an orderly manner.

The word patience is not in their vocabulary. Occupy the slightest of openings ahead is the objective when driving, even if it means blocking a lane, ignoring the traffic markings and pedestrian crossings. Pedestrians on the crosswalk have the right of way even when the walk signal has turned red is unknown to our motorists.

The basic rule in our country’s right-hand driving system is that overtaking must only be through the right side of the vehicle in the front. But that is more ignored than observed.

A patient wait in the line probably would pave the way for a smoother flow, but in a hurry to get ahead of others, most end up creating gridlocks and adding to the risks.

Motorists move about in this cantankerous manner because law enforcers don’t care, and we, the people, tolerate both the law-breaking motorists and the uncaring law enforcers.

The dangers lurking on our roads are already high as potholes pose a threat to every vehicle. If there is one single thing that can be picked as the worst performance of the current government, it is the pathetic condition of our roads, especially in the capital city.

Leaders of all hue, and officials, make eloquent statements about speeding up road repairs, but very little seems to change. Some streets were dug up more than a year ago and are comparable to the bombed-out streets in Ukraine and Syria.

Top officials and elected representatives entitled to seven-seater air-conditioned, chauffeur-driven SUVs at taxpayers’ expense seldom realise the condition on the roads. Their vehicles are equipped with good suspensions to help the journey smooth on potholed roads, unlike the two-wheelers or three-wheelers the ordinary people rely on and suffer bone-jarring daily commutes.

Maybe the elected and appointed officials should be mandated to travel by public transport at least once a week to know the commoner’s plight. The first-hand experience could jerk them out of inaction.

Congress leader Rahul Gandhi who is leading the Bharat Jodo rally in Kerala, made a notable observation. He said both UDF and LDF were responsible for the dire state of our roads. But as someone who wants to change things and lead the country forward, he missed a golden opportunity to walk the talk.

Instead of taking up the entire breadth of the road for his rally, he could have set a precedent by keeping themselves to a side of the road and allowing the traffic to flow. That would have been a sign of a desirable change that Kerala needs.

This kind of political rally that blocks roads is something that the state has long been witnessing. So much has changed over the years, but not the attitude of the political parties.

If this condition of roads makes vehicle owners slam their heads against the wall, spare a thought for the less well-heeled. Getting splashed with muddy water as cars screech over potholed roads is the least of the dangers they face.

In rural areas, speeding vehicles, especially private buses, present a clear danger to those walking on the roads while in cities, there is hardly any safe space to take a stroll as footpaths are often turned into illegal parking lots.

But the question to ask is even if infrastructure improves, will we be able to get rid of the chaos on the road, given a total lack of road etiquette? The evidence seems to suggest otherwise.

Look at the pavement and cycling path provided under the Metro line in the Alwaye section. It was done scientifically with even markings for the visually impaired to walk safely. But vast areas of it have become dilapidated and transformed into a dumping yard and parking lot, forcing the pedestrians onto the road.

The old dictum was a society gets a government it deserves. In Kerala’s case, it looks like we are getting the traffic we deserve.

It is again that time when everybody is gazing ...