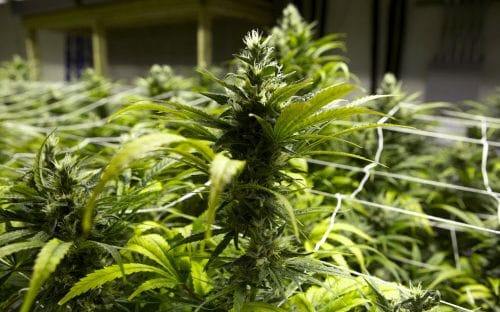 One issue that has dominated the political debate in Kerala lately was the K-Rail project, which the government is adamant on going ahead with a high-speed rail linking the state end to end.

The main bone of contention is the project’s financial feasibility. Its proponents claim the Rs 63,940-crore venture will reward the state with huge benefits, while opponents argue that the revenue projection is too optimistic. They are also sceptical that cash-strapped Kerala can raise the investment the project requires without granting undesirable concessions.

As this debate was hotting up, an unexpected development linked to the Kochi Metro propped up. A ganja plant, already four feet tall, was found growing on government land near Palarivattom next to a pillar supporting the elevated rail.

Some enterprising souls speculated it could be pointing at how to fund the speed rail behemoth as plenty of land to farm would be available once that gets going.

Wild as it was, any dream of making ganja the lifeblood of the high speed rail project was nipped in the bud and the authorities duly chopped down the plant under the Palarivattom metro track.

While the rail project continues to produce smoke and fire, a discussion about growing ganja – also known as cannabis, marijuana, and hemp – never took root.

Ganja has been used in the sub-continent and other Asian regions like China for thousands of years. After the British took control of India, they tried to criminalise the use of the plant from 1833. It didn’t succeed due to ganja’s link to indigenous medicine and religious festivals.

The criminalisation of cannabis started when the United States established the Federal Bureau of Narcotics in 1930. In the post-World War era, the Americans had set the ways of the world, and in 1960, the United Nations made Washington’s policy a global directive, classifying the plant derivatives as hard drugs. India was granted a 25-year reprieve to regulate domestic use.

Accordingly, in 1985, India passed the Narcotic Drugs and Psychotropic Substances Act (NDPS) Act, which imposed a total ban on marijuana. Still, states were given the power to regulate some variants like bhang, consumed liberally during festivals like Holi and Sivaratri. Most Indian states cracked down hard, with places like Kerala putting an end to large-scale farming of the plant.

But times are changing, and research has shown that some plant components are useful for medical science. This has led to several states in the US and countries like Britain, Denmark and Israel decriminalising the use of marijuana. It means the use of marijuana is still not open but regulated and, in some places, sold only to those who get a prescription for it.

Meanwhile, Canada and Uruguay have allowed it to be used for recreational purposes. All this has led to a boom in the sale of marijuana, and global investors, smelling an opportunity, are backing farms and research in the field that are mushrooming.

Studies have shown that the “high” that a user gets from marijuana comes from THC, or tetrahydrocannabinol, as it is a chemical that has psychological effects. Another ingredient, cannabinoid (CBD), is non-psychoactive, according to the National Center for Biotechnology Information of the US, and found to be useful in a range of products, from medicine to skin cream.

The potential of a lucrative medicine market has spurred some Asian countries like Thailand to encourage the cultivation of marijuana actively. The Thai government is slated to distribute one million plants in June to the public to grow around their homes. The distributed plants will have low potency, less than 0.3 percent THC.

Smoke is yet to clear on Thai government plans on how they will harvest it, but clinics selling marijuana-infused products have sprung up in many parts of the country.

Though the country has some of the strictest anti-drug laws, the marijuana plant often fell under a kind of “don’t ask- don’t tell” policy as its leaves were often used in the local cuisine and that of neighbouring nations like Cambodia.

A recent Reuters report said Malaysia and Singapore are in the early stages of debating whether to legalize medical marijuana. Taiwan and South Korea have legalised medical marijuana, while China is the largest producer of CBD goods though the country has a domestic ban on such products.

Many medical experts warn against allowing the widespread use of marijuana. They claim to have found proof of it leading to severe health problems like respiratory and psychotic problems and even cancer. But reports of beneficial effects derived from cannabis use, like in palliative care and as a stress buster, are changing the attitude towards the plant.

The United States admits war on drugs has failed to achieve its target, and many experts point out the massive expenditure linked to the arrest and jailing of marijuana users there. There is no specific data on marijuana-linked cases in India. Still, a think tank based in New Delhi ran through the drug possession cases in Mumbai and found the majority were over marijuana possession.

Vidhi Centre for Legal Policy says in its analysis of over 10,000 cases of drug-related arrests, nearly 90 per cent were over ganja possession.

Kerala has been relatively successful in rooting out the farming of the plant, but the usage continues. Excise officials in the state say there has been a spike in the seizure of marijuana that is now being smuggled in mainly from Andhra Pradesh, where forest areas are not always under government control due to an ongoing insurgency.

One top official said the use of ganja among the youth in Kerala had gone up, and many of them don’t see it as a hard drug anymore. Their access to drugs has also become easier as many get into high-paid jobs straight after college or have enough wealth at home to splurge. Moreover, middle-aged parents are often in the dark about the internet activities of the youngsters.

But he admitted that a rethink might be forced by the fact that the youngsters don’t see marijuana as a hard drug as they are aware of global changes and decriminalisation happening elsewhere. In addition, the fact that the use of marijuana derived products would also attract businesses into it could lead to the state having to spend more resources on marijuana hunting.

The world-renowned Kerala Gold cannabis, also called Idukki Gold, is now grown outside the state, and some officials say Kerala farmers have lent their expertise by visiting those areas. Officials say some cultivators even bring the harvested leaves and flowers to the Idukki area and redistribute it to live up to its tag of Idukki Gold, which has a high demand.

It is almost like the users are looking for a geographical integrity tag like the ones awarded to farmers of the champagne region of France, and Idukki could get one if ever restricted ganja farming gets going there.

According to reports that cite official data, three crore people in India use or have used marijuana. A content marketing agency based in Germany, which tracks marijuana trade globally, claims New Delhi and Mumbai could rake in Rs 725 crores and Rs 641 crores respectively as tax if the sale of marijuana were regulated.

In Kerala, one of the main revenue streams for the government comes from the sale of liquor, which is state-controlled. Opening up another revenue channel through regulated ganja sales could find favour with some hard-nosed economists. Moreover, during the olden days, the state of Travancore used to license the sale of ganja and opium.

With attitudes towards marijuana shifting across the globe, India will soon be forced to review its position on the matter. When the UN Commission on Narcotic Drugs voted in December 2020 to remove cannabis and cannabis resin from a category of the world’s most dangerous drugs, India backed the move.

Some political leaders, like Shashi Tharoor, have called for a rethink on the total ban on marijuana and have urged regulated use for research and medicinal purpose. Yet a proper debate on the subject has not taken place in the country.

The unknown ganja plant grower in Palarivattom may well have shown us the green shoots of future developments.

One issue that has dominated the political debate in Kerala lately was the K-Rail project, which the government is adamant on going ahead with a high-speed ..

Walk around anywhere in Kerala during mid-summer (March-April); you will see mango trees laden with green fruits. A wide variety of them – from lemon-size ..

The outcome of the weeks-long Covid-19 lockdown in Shanghai could, perhaps, show political leadership everywhere a valuable lesson: stubbornness is not ..

Have you ever been to Krung Thep Maha Nakhon? This question probably left you stumped. You may have heard of Timbuktu and even know where it is. Krung ..