The breakdown of the health system in one of the wealthiest cities in the world indicates that Beijing is not ready to change its policy. 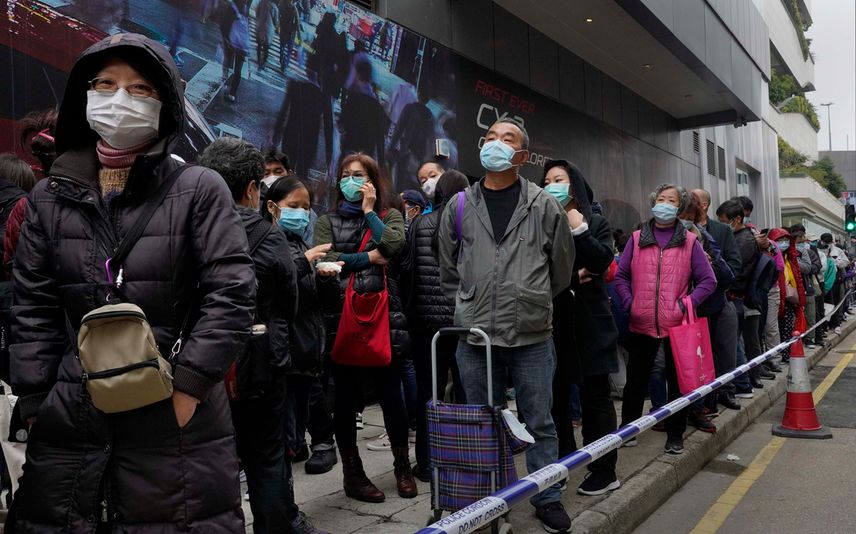 Covid patients dumped outside hospitals is a scene India witnessed when the Delta wave ran amok last year. It was a clear warning to the rest of the world that Covid surges have to be nipped in the bud to prevent the health system from collapsing.

Yet the same scenario was repeated recently in Hong Kong, one of the wealthiest cities in the world.

As many countries battle surges to avoid such catastrophes, economic chaos caused social distancing measures have led to protests and riots in many places. Amid all this, China has shone brightly as most of the country enjoys normal life.

Any sign of an outbreak in China invites a complete lockdown and compulsory testing of millions in the area, and the spread contained. Beijing seemed to be almost taking pleasure in showing off its ability to run millions of tests in record time.

The Chinese Communist Party (CCP) trumpeted this as a clear victory for its top-down governance system and pointed out the chaos in well-developed countries, proving the democratic system’s failure.

The arrival of the Omicron variant has jolted the scenario. No one would have imagined that Hong Kong, a city known for its robust economy, super-efficient bureaucracy, and public services, would see patients left in the harsh winter open air.

The combination of a stubborn Beijing and an inefficient local administration made up of loyalists have brought the city to its knees.

When China regained control of the city in July 1997, Hong Kong was promised a high degree of autonomy under Deng Xiaoping’s “One Country, Two Systems” policy.

At the time of the handover, an equally significant factor was that Hong Kong people, though not too bothered about democracy, were well aware of their civil rights. They demanded good governance.

The city’s foundation was so strong that Hong Kong continued to generate immense wealth even after the handover. Lulled by this economic strength and blinded by the loyalty to the new master, the CCP, Beijing’s subalterns administering Hong Kong believed that things would be under control as long as people could make money, which was also the way on the mainland. Thus, they failed to notice the cracks developing at the lower levels.

This political blunder led to prolonged street protests in 2019-20, and as is its wont, Beijing used its sledgehammer approach to quell the dissent. The protests have been wiped out, for the time being, by imprisoning almost every leader, but Hong Kong’s problems continue.

Meanwhile, on the health front, alarm bells have been ringing for years as people had to wait for months for an appointment with specialists.

Hospital buildings were completed, but floors were left vacant for lack of medical personnel as unions representing doctors objected to recruiting qualified personnel from abroad to protect their members.

When the pandemic erupted in 2020, a new union formed by health workers took to the streets demanding more safety gear and change in government health policies. But the government’s reaction was to accuse them of playing politics and jail the union leaders.

By painting every protest or demand in black and white, Beijing and Hong Kong authorities have silenced the city. To them, the party is always first, not the people. So, the CCP’s main focus was to eliminate all dissent. Nothing else mattered.

Hong Kong is now reaping the results of that policy as its health sector wilts under the rising Covid cases.

Hospitals are overwhelmed, air travel is almost insignificant, and transport disruption leads to even a shortage of vegetables.

Many health experts have pointed out that it is time for Hong Kong to adopt a less-stricter approach than the “Zero Covid” policy of China. But the Beijing-aligned media and leaders quickly warned them that arguing for “Living with the Virus” approach could breach the draconian national security law.

Singapore, a place that Hong Kong gets compared to often, has adopted a much more flexible approach, allowing asymptomatic Covid patients and those with mild symptoms to quarantine themselves at home. This has given them enough breathing space despite thousands of new cases emerging every day.

But in Hong Kong, even as the city is clearly floundering, the effort of the mainland authorities seems to show off its prowess, with Hong Kong leaders trying to show their abiding loyalty.

The decision now is to test the entire 7.5 million population, build temporary hospitals and isolate the infected, following the mainland model. But experts doubt the effectiveness of this.

With its jungle of skyscrapers, Hong Kong is one of the world’s high-density communities. So, the rapidly spreading Omicron can quickly flare up. Moreover, the idea of getting tens of thousands to line up for tests itself could become a super spreader event, they point out.

The mass test approach also raises some other questions and the authorities have not revealed what the next step after the exercise will be.

The policy of sending all positive cases and their first contacts to isolation facilities has already clogged up the existing facilities. Even the plan to build a few temporary facilities won’t help as the modelling shows the city – where the daily infections have already increased 64-fold from the start of February – could see as many as 20,000 cases per day within a few weeks.

Reports have highlighted flaws in this approach as unlike other Chinese cities, Hong Kong population is not homogenous and could face resistance against this. Moreover, the city does not have volunteer networks to provide help like delivering food and other essentials to 7.5 million people.

In a way, this situation reveals the flaws of the communist governance system that Beijing has been touting as a better model than democracy. Provincial leaders picked for party loyalty are often eager to please the party’s upper echelons than serve the people, a fact well illustrated by the Wuhan administration’s ill-fated decisions when the coronavirus outbreaks started in 2019.

The Hong Kong government is supposed to have more autonomy than a Chinese province, but things have gone to such a level that all its administration does now is to kowtow to its bosses up north.

It was profoundly clear when Lam unveiled a new set of measures on February 22 to combat Omicron. “The central government – serving as Hong Kong’s backbone as always – has agreed to support us right away,” the chief executive said.

Given the economic hardship the city is enduring and its limited medical facility, it is prudent to adopt a flexible way that won’t paralyse the entire health system and push the people into more despair. But politics is prevailing over common sense and science in Hong Kong.

Beijing is now caught in a bind. It needs to show that its way of tackling the coronavirus outbreak is the best. But it also needs to ensure that Omicron does not spread across the border in a big way.

As life now gets harder in Hong Kong, some people try to escape to the mainland. It increases the risk of a super spreader slipping past its security nets. As people on the mainland are inoculated with vaccines less effective against Omicron, this could be dangerous.

Beating people into submission is something that Beijing can achieve. Whether it will have the same effect on a coronavirus that mutates with predictable regularity is yet to be seen.

The outcome of the weeks-long Covid-19 lockdown in Shanghai could, perhaps, show political leadership everywhere a valuable lesson: stubbornness is not ..

Have you ever been to Krung Thep Maha Nakhon? This question probably left you stumped. You may have heard of Timbuktu and even know where it is. Krung ..

As 'The Godfather' movie marks its 50 years, a look back reveals how art and real-life collided and converged at several points when the movie was being ..

We will fight them on the ocean, on the beaches, on the streets, and on the hills, said British Prime Minister Winston Churchill in his famous speech on ..