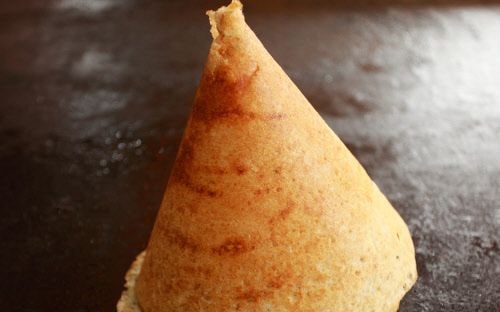 Hot, sizzling dosa straight off the thava usually gets a thumbs up from almost everyone all over India.

Still, when a startup came up with a device that could produce crispy dosas hassle-free, at the click of a button, it set off a virtual war of words on the internet.

The Indian Twitterati and Reddit forums started cackling and hissing like water sprayed on a hot thava after the Chennai-based Evochef released a video of its invention, EC Flip.

This machine should be a blessing for anyone who has made dosas for a family. The traditional process, whether for a rushed breakfast or a relaxed dinner, required someone standing by the stove to churn out crispy hot dosas as long as calls for them continued.

Add personal preferences to the mix and that could drive the dosa cook crazy – one wants thin but not too crispy, another wants crispy like a pappadom, yet another prefers thick and fluffy.

No other dish in our culinary culture reveals a strain of male dominance than dosa. Flipping it out hot is usually assigned to the mum/wife/helper. Most even end up having it alone as the satiated crowd moves away from the table after having their share.

Now, here is a machine that turns dosa-making easy, but it is greeted with jeers.

“This is useless innovation. Making dosai is not the hardest part. Preparing batter is the harder work,” said one tweet. Others called it a waste of money and dubbed it a “dosa printer.”

Nevertheless, some did see its usefulness of it.

“This is a great product,” said one tweet. It went on: “If you don’t like it, chances are that you either live in a place where dosas are readily available, or your mother/cook/spouse makes it for you.” Some others pointed out this would enable all to sit at the table together while hot dosas roll off the machine.

The debate has brought into focus the use of robotics in the kitchen. It is happening in a big way, and everything from pizza to boba tea is now on the robotics menu.

Even better, Bangalore-based Nymble’s robot chef is set to offer an array of Indian food options. The company says the robot named Julia will offer a variety of dishes. All you need to do is choose a dish from its menu, load the relevant ingredients and flip the switch. Then, the robot will cook the dish and alert you when done, says the company.

But we in India have to wait a while to enjoy this facility. The company is running trials in the US and plans to start sales there in the second quarter of next year before coming to the Indian market. So don’t get rid of your pans and pots yet.

Whether this machine will curry favour with the Americans is something to be seen, but one area where robotics is making a mark in the US is pizza joints.

High costs and low margins have plagued pizza shops there, and robots are now seen as a way out. Some companies claim that as much as 30 percent of the costs can be cut by using machines to make pizza without compromising the taste.

Stellar, a company floated by a former SpaceX employee says its robotic invention can make a pizza in 45 seconds flat, and its machine can fit into a truck and brought to places like stadiums and campuses.

The global pizza market is estimated to be worth about US$120 billion, and a third of it in the US. So more robotic firms are now aiming to grab a slice of that market.

Another area attracting the attention of robotic experts is the beverage sector. A robot bartender was showcased during the Beijing Olympics. Other machines for delivering smoothies and other beverages are also in the making.

Meanwhile, Bobacino, a California-based startup, is offering fully automated kiosks to serve bubble tea and is getting a lot of attention from potential investors. The company says the compact robot hands out tea according to customers’ choice and cuts expenses by about 35 percent.

The mobile unit occupies about 16 square feet. It is also portable and could tap into a global boba tea market, which Bobacino estimates will hit over US$4 billion, given the millennials’ love for iced tea with tapioca pearls.

So, now that there is a machine in Chennai that can roll out dosas just as you want them, can we also expect a robot that will make perfect Suleimani or cardmom tea?

Tea stalls run by Malayalees have been famous worldwide (even in outer space, if you go by that old joke) for generations. Wayside tea stalls have flourished in Kerala for the past few years. It indicates an economic incentive for someone to dream up a robotic tea maker to take Kerala’s romance with the beverage to the next generation.

The IT sector in Kerala is thriving, with many established players setting up bases and thousands of startups registering in the state. With Genrobotics, and other Kerala robotic ventures making their presence felt internationally, our youngsters have shown that they can compete with the best and triumph.

Okay, it is too optimistic to imagine a robot-operated dosa stall and tea kiosk appearing on the roadside anytime soon. But given our thriving IT scene, is the dream of seeing such machines at least inside the technological parks too wild?

Maybe this is a challenge the young brains in engineering colleges should consider when they sit down with a cuppa next time.