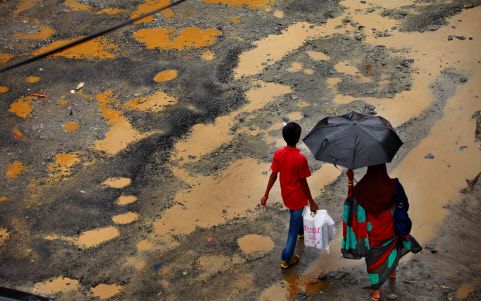 Disclaimer: All characters mentioned in this column are fictional. Any resemblance to people living or dead is purely coincidental. Also, no roads were damaged while writing this.

The bone-jarring auto ride was torture. And the thought of sitting with my uncle for the next hour added to the already gloomy scenario.

Don’t get me wrong; he is a friendly, decent guy. The problem, however, is he is always brimming with business ideas and will drown you in his visionary outlook about everything under the sun. How a man with such brainwaves ended up living in this part of the city where even transport was mostly unavailable, street lights non-existent, and tap water at a premium is a mystery to me.

When I arrived, he was sprawled out in the traditional easy chair on the veranda with the usual pile of newspapers and magazines beside him—the usual sight in the daytime. I cleared my throat to announce my arrival, and he peeped from behind a newspaper.

“Sorry, I am a bit late. The auto could only travel slowly as the road was still dug up. It has been like this for a year now, right?” I said as the conversation starter.

Like weather is to our old colonial masters, the British, roads have become the favourite subject of talk for us in Kerala. Of course, both the British weather and the Kerala roads haven’t changed over the ages, but they still offer much to talk about.

By starting this favourite Malayali topic, I was also hoping to keep him away from his pet peeve: the quality of daily television debates. He is bitterly critical of them. But, still, you will find him sitting in front of the idiot box religiously every night and talking about it disgustingly the next day. Was he unaware of the switch-off button? I have sometimes wondered.

No such luck. He set aside the newspaper he was reading and started:

“Yeah, they were debating about it on the TV yesterday. As usual, none of these debate coolies know what they are talking about; they just scream abuses at governments and contractors,” the disgust evident in his tone.

I prepared mentally for a long tirade about TV debates. Then he surprised me with a new twist.

“They don’t understand how useful the condition of the roads is to the defence of our country.”

It rattled me. Defence of the country? What was he on about?

“You heard about China sending its spy ship to Sri Lanka to monitor this part of India, right?” he shot back.

“Yes, read about it,” I replied, a bit mystified about where this was going.

“Well, that ship can locate major defence installations, like missile bases, and their satellites can track our defence exercises. So we should be keeping it away from their prying eyes,” he leaned back on the chair as if he had just revealed a clever trick like using clouds to avoid radar detection.

“Our roads can give a cover to our defence forces?” I was getting a bit baffled.

But my uncle was emphatic. “Yes, didn’t you see that big hole in the middle of the road when you were approaching this house? It is a perfect silo to hide a missile. No satellite will be smart enough to look for missile bases in the middle of a busy road.”

I was impressed by this out-of-the-box thinking.

“You should submit this idea to the army,” I said.

“Done already,” he replied. “I have sent them a complete proposal on how to use Kerala roads to hone the skills of our defence forces. The all-weather terrain tanks could see if they would stand the test of a battle if used on these roads. Amphibious landing units can practice their plans too.”

“Hope they take up your suggestions,” I replied as scenes of tanks and armoured carriers on our roads rushed into my imagination. I wondered if the local auto union guys near my home would tie their party flag on the tank turret.

Then he startled me out of my day dreams.

“We can also use the roads for shooting,” he said.

“You mean live fire drills?” I was not sure this was a good idea.

“No, I meant filming,” he said with a dismissive wave of his hand, clearly not impressed with my grasp of things.

“Didn’t you read that Jackie Chan and crew went to Syria to do some filming to use the war-torn streets as a backdrop? Kerala can turn its roads into a big money spinner if we lure such filmmakers to come here.”

“We are trying to attract film studios and international tourists by showing them palm-fringed beaches and lush mountains. These are things that other places can show too. Our strength is our potholed roads. No one else has them,” he said, holding up a newspaper photo of a dug-up road as if he was displaying a Taj Mahal picture.

“Tourists will pay money to come and see our roads?” This was news to me.

He was getting a bit exasperated, having to explain everything to me.

“Haven’t you heard of disaster tourism? People are willing to cough up a fortune to travel to hurricane-hit areas and volcano eruptions to see the scale of devastation, though it is dangerous. Here they can be safe and see similar devastation without risking their life and limbs.”

“I am not sure many people would enjoy travelling on these roads,” I interjected, trying to stem this fountainhead of ideas.

“Then encourage high-tech companies to come and use these facilities,” he was not finished but was only warming up.

“To set up offices in technoparks?” This twist in the conversation threw me off balance. “Don’t we need better roads to commute then?” I inquired.

“Not for a commute. Haven’t you heard that driver-less cars are becoming the latest hi-tech fantasy? Those companies in the United States and China spent millions of dollars to create obstacle courses to try out their models.”

“We already have such facilities on our roads and can rent them out to automobile companies to test their sensors and radars. No Chinese or American brain will imagine the kind of road obstacles that we can provide. If any autonomous car can survive a few kilometres on Kerala roads, it should merit a special quality certificate. That could become the gold standard globally,” he said.

“Have you written to someone about this too?” I asked.

Disclaimer: All characters mentioned in this ...

When technology rings a bell

Racing ahead with technology

Imagine you are in the thick of a high-octane ...