I can vouch for  the fact that the Church is not anti development. Their community gave up their own church and the priest's residence in Thumpa for the establishment of what became the Vikram Sarabhai Space Centre. 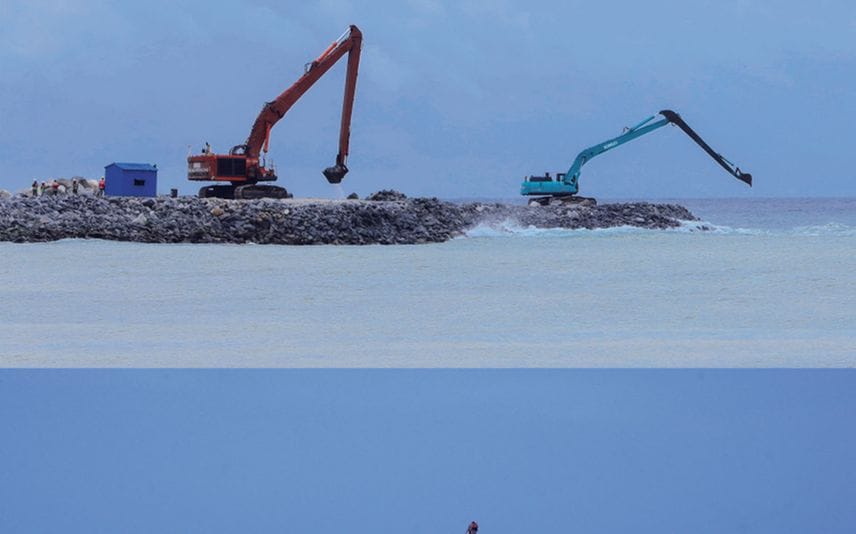 At a time when the agitation of the fishing community against the development of Vizhinjam port, led by Latin Catholic Archdiocese of Trivandrum, has been dominating the news, and charges are being flung somewhat loosely of individuals being 'anti-national' and 'anti-development', I believe it is time to change that narrative and focus on the essentials of the issue.

The anguish of the coastal people is genuine, and easy to understand. Year after year they have seen their homes and habitations on the seashore being washed away by the relentless onslaught of coastal erosion, their beaches swamped by sea inundations, their homes toppling into the waves. Things have become worse in recent years. Many fear they are literally going to be pushed out of their own community's traditional coastal areas, and made to seek refuge in unsuitable places far from the sea, where they make their living. Their anxiety is existential.

Their agitation rests on a premise that is not universally accepted. The church agrees with those who believe that the rampant problem of coastal erosion has been worsened by the port construction, and has called for the construction of the port to be suspended. Others argue that the vexed problem of sea inundation, leading to coastal erosion, precedes the development of the port and relates to changing weather patterns because of climate change. But no one can deny that coastal erosion is indeed a reality, and that fisherfolk, often living desperately close to the poverty line, have had to suffer the loss of their homes with grossly inadequate compensation - including those displaced by the sea literally warehoused in godowns for years in inhumane living conditions. If they have snapped now, it is not without reason.

At the same time, suspending port construction is not a feasible demand. Kerala taxpayers have already spent hundreds of crores on the construction so far and that money cannot simply be written off. And Vizhinjam is a vital project for India's national security, because it is intended to be our first major container port capable of taking on the transhipment of goods, most of which currently are trans-shipped via foreign ports -- especially Colombo, a port largely under Chinese control. In fact Colombo trans-ships more Indian goods than all of India's own ports. There are serious geopolitical implications to being dependent on Colombo for trans-shipment at a time of increasing tensions with China. Vizhinjam, located just ten nautical miles from the main shipping routes between Europe and Asia, and with an undredged depth of 24 metres, can host the biggest container ships and dramatically reduce our vulnerability to foreign ports.

The Vizhinjam port is therefore potentially a vital strategic asset for India, and a source of major revenue for Kerala for decades to come. A port opens up many logistics and manufacturing opportunities in its hinterland, thus creating local employment and wealth.

Stopping its development would be detrimental to the state's interests. But ignoring the needs of the local people in the name of development makes no sense either.

As MP for Thiruvananthapuram, I can vouch for the fact that the Church is not anti-development. Their community gave up their own church and the priest's residence in Thumba for the establishment of what became the Vikram Sarabhai Space Centre. They volunteered, at the cost of their own livelihoods, to divert their boats to save lives when the state was drowning in floods. Their loyalty to the nation and to development is beyond question. But it has not been reciprocated. The fisherfolk have already been battered by the depletion of fish in the nearby seas, frequent 'no-fishing' days because of weather disruptions, competition from foreign trawlers beyond India's territorial waters, the removal of central subsidies on the kerosene that powers their boats, and the inadequate rehabilitation compensation offered by the state government to the displaced. Coastal erosion is one more tragedy on top of a heavy pile of misfortunes they have had to endure.

For a decade now I have raised the issue in Parliament and directly with central ministers, demanding funds for seawalls and groynes to mitigate the force of sea inundations. But the Central government says it is the State government's responsibility, and the state government says it has no funds. Neighbouring Tamil Nadu has spent around 118 crores on constructing such defences on the adjoining coast and so saved their own coastline; Kerala has spent next to nothing on coastal defences in the last several years. The result is that the sea has taken a severe toll on our state and the brunt of the loss has been borne by the fisherfolk.

The Church supports development but fears for the very existence of the Catholic fishing community on the coast. This explains the intensity and passion behind their agitation. But matters have now escalated to a point where abuses are being flung, an FIR has been filed against Church leaders, and another suit demands compensation for damages inflicted by the protestors. We cannot allow this situation to get any further out of hand.

On 16 August, before the 'samaram' began, I met with Archbishop Netto, Bishop Christudas and Vicar-General Eugene Pereira early in the morning and discussed their concerns. After the meeting, I met Chief Minister Pinarayi Vijayan in his office, and conveyed my views. Of their seven-point list of demands, I fully support the first six, and the part of the seventh calling for an expert study on the causes of coastline erosion, demurring only with the demand that port construction must be stopped. Coastal erosion is a problem that needs attention and resources, to build sea-walls and groynes to strengthen our shoreline and save the coast, and to provide compensation and rehabilitation for the devastated fisherfolk. It is not going to be solved by unjustly abusing those who have proved their patriotism time and time again.

In fact if we are discussing patriotism, I wrote to the Prime Minister to point out that if China had taken even a few square meters of Indian territory, there would be an uproar in Parliament, the government would be shaken and the nation would be up in arms. But the sea has taken 64 square kilometres of Indian territory in my constituency and no one is bothered to find the resources to prevent it. This is also the sacred soil of our motherland that is being lost to the sea. It requires all of us to recognize the importance of the challenge and to respond to it accordingly.

An MP has no executive authority; the power to act lies with the central and state governments. I can only recommend measures, and I have done so. The state government must take steps to improve the rehabilitation of the affected fisherfolk; offer homes closer to the shore for the displaced fisherfolk; find the funds to construct seawalls and groynes; and alleviate the burden of high kerosene prices on people barely able to make ends meet. If this requires Central government assistance, I am willing, as the local MP, to support a request for a special relief package for the state and to lobby for it in Delhi. Development will bring money to the state; but to facilitate it, the state must spend money to help the affected people. Equally, if the protests succeed in stopping Vizhinjam port, not only will a 'dream project' be lost to the state, but so too will be Kerala's hopes of attracting any serious investment to the state, which is so essential for our future.

We all have a stake in the successful resolution of this crisis. For Kerala's sake, for India's - and for the sake of the agitating fisherfolk.