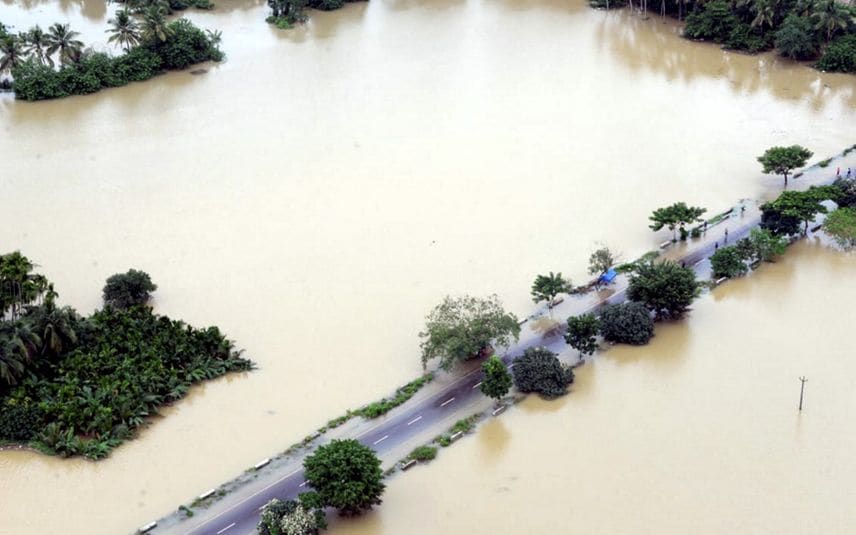 As I write these words, heavy rains are again lashing Kerala, as they did in 2018 and 2019, causing colossal damage and loss of life. Though vivid footage of swirling floodwaters is once again dominating our television screens and mobile phones, one hopes the damage will not be as severe as on the previous two occasions. Still, it is time we confronted an inescapable reality: the Indian Ocean region, which hosts two-thirds of the world’s population, is particularly vulnerable to the effects of climate change and extreme weather conditions. Kerala – and many other parts of peninsular India – may have to live with much more flooding in the years immediately ahead.

While rising sea levels and coastal inundations have increased in magnitude, frequency and intensity, increased rains – in quantities the earth is unable to absorb -- are another well-known reflection of the climate crisis. It is no consolation that what is happening in the Indian Ocean is also responsible for severe events in other parts of the world. For instance, recent flooding and landslides in East Africa and bushfires in Australia have been linked to higher-than-usual temperature differences between the two sides of the Indian Ocean – a phenomenon called the Indian Ocean Dipole. Dipoles are likely to get worse with increased greenhouse gas emissions. In a 2014 study published in the prestigious scientific journal Nature, scientists in Australia, India, China and Japan modelled the effects of CO2 on extreme Indian Ocean dipoles, such as those in 1961, 1994 and 1997, and found that if emissions were to go up further, the frequency of extreme dipole events would increase from one in 17.3 years to one in 6.3 years. The Kerala floods of 2018 were described as the worst in a century; but floods almost as bad occurred the very next year, and a new round seems to have begun two years later. Is this going to be an annually recurring tragedy?

Things are even graver from India’s national perspective. The Indian Ocean accounts for over 95% of India’s trade by volume and 68% of its trade by value. India is the fourth-largest importer of LNG, of which 45% comes through the Indian Ocean. India’s fisheries and aquaculture are also significantly dependent on the Indian Ocean. Our maritime exports have grown 55 times (in volume) between 1962 and 2012 and fisheries exports are valued at over US$ 2.5 billion. It is clearly no exaggeration to say that the Indian Ocean is absolutely crucial for the Indian economy, and this has only become clearer with time.

Regional integration has also become increasingly important. There has been steady growth in intra- Indian Ocean exports (in other words, exports from one country in the region to another) -- from US$ 391,098 million in 2005, to US$ 1 billion in 2014, accounting for 30% of the region’s total exports to the world. The United Arab Emirates, the biggest trader in the region in 2014, directed almost 50% of its exports to other Indian Ocean countries, followed by Singapore, India, Malaysia and Saudi Arabia. Despite this, the World Bank has called the Indian Ocean Region one of the worlds’ least integrated regions. Integration boosts trade and the movement of people, and is crucial to the promotion of economic prosperity. The devastation of climate change will undermine regional integration as well, threatening the well-being of Indians and others for decades to come.

At the turn of the twentieth century, a casual observer of any one of the myriad trading ports of the Western Indian Ocean could have said these were the “green shoots” of increasing integration and growing inter-connected prosperity. However, with the arrival of the “Oil Age,” capitalism, and new nation-state institutions in the last century, Indian Ocean trading communities have seen a complete transformation in the ways in which they engage with each other. Their once vibrant communal interaction across the seas has been replaced by displacement and even the loss of historic connections. Today, as global capitalism and reactionary nationalist impulses engage in a war to win the hearts and minds of nation-consumers, what does this mean for trans-national communities (especially those that predate the nation-states in which they live)? Where do they fit in? And will climate change undermine even what currently exists, forcing countries and communities to retreat into self-protection and focus principally on their own survival?

Just as globalisation today appears to be in a crisis driven by the increasing divide between the haves and have-nots, those who profited from the benefits of globalisation and those who have been left behind, historically cultural exchanges in the Indian Ocean region also suffered when conquest and the expansion of colonial empires, in an attempt to establish a hegemony over trade routes, replaced the previous – and largely peaceful – method of commercial and cultural interactions. Today, new threats affect the Indian Ocean region and communities within this area in two main ways: first, through geopolitical competition for sea lanes, resources, and maritime dominance in the region; second, through the increasingly visible effects of climate change, which contribute to freak events, natural calamities with increased frequency and magnitude.

For hundreds of years the Indian Ocean has been the site of naval battles, movements of migration, and commercial trade, a place of great cultural interaction and military conflict as well as of the moving syncretism of the exchanges of culture and belief. As the rains flood the hills, plains and rivers of Kerala today, it is vital to realise there is something even bigger at stake. The vast expanse of ocean within which we are located must be safeguarded – not just from military aggression but even more from environmental degradation that threatens us all.