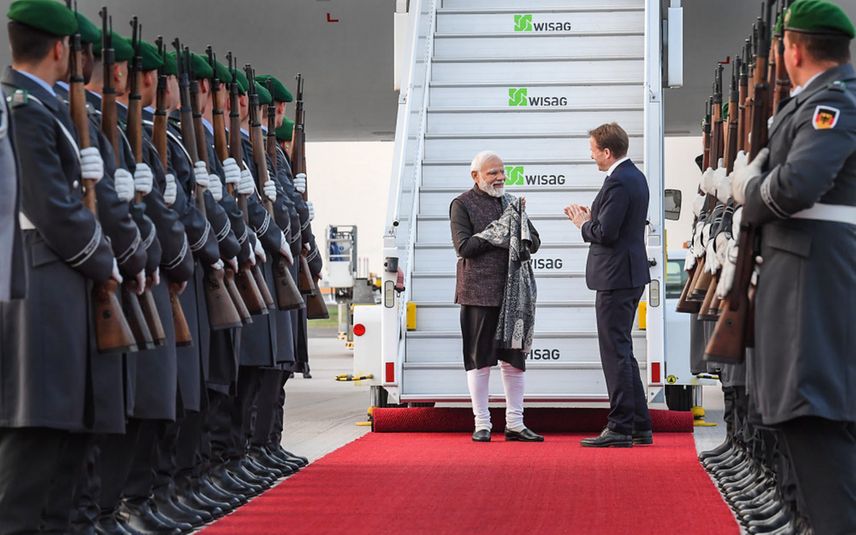 Prime Minister’s Modi’s trip to Europe this week, preceded last week by the visit to New Delhi of EU President Ursula von der Leyen, has prompted renewed interest in India’s relations with Europe. India has a number of affinities with Europe and with the European Union, not least since it, too, is an economic and political union of a number of linguistically, culturally and ethnically different states. Both are unwieldy unions of just under thirty states, both are bureaucratic, both are coalition-ridden and both are slow to make decisions. But in practice these affinities have not translated into close political or strategic relations.

India has had a very long history of relations with the Old Continent, going back to the days of the Roman Empire. After centuries of languishing, trade is once more a major determinant of the relationship. The European Union (EU) is India’s second largest trading partner, accounting for 20 per cent of India’s global trade in goods, in addition to services exports and imports. But Europe’s contribution to India’s overall global trade has been shrinking: the percentage of India’s total trade made up by imports from and exports to EU member states has in fact been decreasing even while the Indian economy grows. Negotiations for a Free Trade Agreement have long being held up over a number of issues, from India’s resistance to reduced tariffs for automobile imports to European-dictated provisions on climate change and human rights, which have fallen afoul of India’s allergy to being lectured to. Reports suggest they have picked up a new head of steam, and one can only hope that this time it endures.

The case for India–EU cooperation could be strongly made, since the bulk of the problem areas in the world lie between India and Europe (or, as Sweden’s then Foreign Minister Carl Bildt once put it, between the Indus and the Nile). India’s security interests in Afghanistan and our increasing salience in the geopolitics of the Indian Ocean, especially in the security of the Gulf, the source of much of Europe’s energy, offer important intersections with Europe’s interests.

And yet the prospects for institutional cooperation between India and the EU—despite all that they have in common, the long history of contact between the Old Continent and the subcontinent, and the contemporary relevance of the challenges and opportunities they confront—remain negligible. India–EU relations currently lack substance and strategic weight. Though India was one of the first countries (in 1963) to establish diplomatic relations with the European Economic Community (EEC), and the India–EU Strategic Partnership and Joint Action Plan of 2005 and 2008 offer a framework for dialogue and cooperation in the field of security, it will take time for the EU to develop a common strategic culture, which is essential for meaningful strategic cooperation between the EU and India. The India–EU Joint Action Plan covers a wide range of fields for cooperation, including trade and commerce, security, and cultural and educational exchanges. However, as the Canadian diplomat David Malone has observed, ‘these measures lead mainly to dialogue, commitments to further dialogue, and exploratory committees and working groups, rather than to significant policy measures or economic breakthroughs.’

The oxymoronic lack of European unity in the European Union undermines the credibility of the collectivity. Since Maastricht in 1992, Europe has claimed to have a ‘common foreign policy’, but it is not a ‘single’ foreign policy. (If it were, EU member states would not need two of the five permanent seats on the UN Security Council, those of Britain and France, and be clamouring for a third, for Germany.)

India’s therefore prefers bilateral arrangements with individual member states of the EU, over dealing with the collectivity. New Delhi sees an affinity with London, Berlin or Paris that it cannot bring itself to imagine with Brussels or Strasbourg. It does not help that India also considers Europe with its multiplicity of complex organizations to be over-institutionalized and over-bureaucratized and, therefore, far more complicated and less attractive to engage with than national capitals.

It could also be argued that the EU provides very little value added to India’s principal security challenges. In the immediate priority areas of strategic interest to India—its own neighbourhood, the Gulf region, the United States and China—the EU is almost irrelevant, and the story does not get better if one extends India’s areas of security interest to Central and Southeast Asia. On the big global security issues—nuclear proliferation, civil conflict and terrorism—the problem is the same, while the EU has almost nothing to contribute to India’s search for energy security. Even in India’s quest to be part of the global decision-making architecture, including a permanent seat on the UN Security Council, it is not the EU but the existing European permanent members, the UK and France, and the aspirant, Germany, which bring more value to the table for India. India certainly needs European cooperation in counter-terrorism and European remote surveillance technology, but it would obtain these from European nation states —the Indo-French Working Group on Terrorism, for instance, has met every year since 2001— and not from the EU.

There certainly is, nonetheless, scope in the fields of food security, the response to climate change and the protection of the environment, where Europe could share with India its advances in ‘green technology’. In the sphere of science and technology, India’s participation in both the International Thermonuclear Reactor Project (ITER) and the GALILEO satellite programmes came through the EU. There is also room for enhanced technological cooperation, where India’s abundant and inexpensive scientifically savvy brainpower and its burgeoning record in ‘frugal innovation’ offer interesting synergies with Europe’s unmatched engineering traditions and capacity.

The recent differences between Europe and India over the Russian invasion of Ukraine have introduced complications into the relationship, though the Prime Minister and his European interlocutors have taken pains not to highlight the disagreements but to focus on the broader vision. Still, despite strong and uncontentious relations with individual European countries, the danger remains that Indians will write Europe off as a charming but irrelevant continent, ideal for a summer holiday but not for serious business, and that Europe might reciprocate by concluding that New Delhi is too chronically unable to wean itself off its old policies to be worth wooing. The world would be poorer if the Old Continent and the rising new subcontinent did not build on their democracy and their common interests to offer a genuine alternative partnership to the blandishments of both the United States and China.