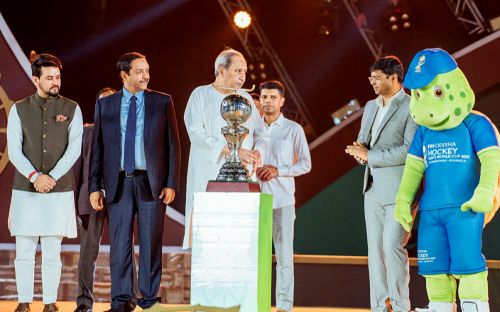 Another Hockey World Cup is in India, the second successive time, the earlier being in 2018. On both occasions, Orissa has been the host. Indeed, this state has now become the cradle of Indian hockey and why not at one time some of the best tribal talents hailed from Orissa and one of them happens to be the former India captain, Dilip Tirkey, who now heads the Indian Hockey Federation. Credit has to go to the Orissa government and, in particular, the Chief Minister, Mr Naveen Patnaik, for showing so much interest in propping up this sport, spending crores of rupees to have the best facilities readied for this top-class event. Can all this inspire Indian hockey to put up something that should bring back memories of the great past when this sport was for India? In 2018, India did not cross the quarterfinal hurdle. Indeed it was the only way back in 1975 in Malaysia that India had won a world championship gold, and since then, the country is still to come again to the podium, let alone win gold!

'Old is gold' is an English proverb that comes to mind when one talks of Indian hockey and football. Both these sports had their best runs decades ago. If India reigned supreme in football in the Asian region in the 60s, then hockey went further, conquering the imagination of sports enthusiasts on the world stage by repeatedly coming up as Olympic champion right from 1928 in Amsterdam. Eight Olympic golds made hockey the most looked-forward-to event for India at one time and swelled the fan base. All that ended in 1980 with the Moscow Olympics, where India won gold for the last time. India had to wait for four decades to feature on the medals podium again, for a bronze medal in the recent Tokyo Games should speak volumes of what this national sport had been through. The sport itself had indeed changed vastly, from playing on natural grass to an artificial surface, from the stick artistry that heralded India’s greatness at one time to sharp, hard-hitting passes centring on pin-point accuracy and swift movements. India apparently could not cope with this art as much as the Europeans and even Australia could. Not just India, even Pakistan, the other leading hockey nation, exhibited the agony of Asian teams as such.

These are changing times for sports in India, and perhaps none inspired this more than the two great performers on the Olympic stage _Neeraj Chopra and P.V. Sindhu_ in the main. Neeraj's exploits with the javelin have been a feature that has dominated the Indian sports scenario for some time now. His Olympic gold was a historic moment in Tokyo, and then his silver medal in the World championship. The urge to continue in this high-flying fashion is the biggest message he had given to his fellow sportspersons in the country that Indians can shine on the international stage. Neeraj missed the Commonwealth Games last year but picking a leaf from this stupendous show were steeple chaser Sable and long jumper, Sreeshankar. Badminton star Sindhu on the other hand became the first Indian woman to pick two Olympic medals after her bronze in Tokyo. Four years ago in the Rio games, she won silver. With seven medals in all, a mixed bag of gold, silver and bronze, India had made the Tokyo games its most successful Olympic outing as yet!

There is more to be done. This trend should not halt here but be a beginning for showcasing India’s sporting abilities in a much bigger way. Just as well that the New Year has begun with new hopes and aspirations on the hockey front. The Tokyo bronze medal win has laid the platform for what many fondly believe would be the start of the resurgence of this national sport. Indeed, skipper Harmanpreet Singh and his colleagues have a huge task in hand for only a podium finish would bring back the attractive element that had made hockey in India what it was. None believes in the team more than the goalkeeper P.R. Sreejesh, the man from Kerala. Playing in his fourth world cup, third on home soil, the dependable custodian on whose shoulder there would be a huge responsibility is a confident man. Sreejesh, if one remembers, had played a major role in India winning a medal in Tokyo.

While hockey will gather all the attention for now, the new year is also a good time to assess India’s challenges ahead as the country marches on to prove its credentials as a sporting nation. Chopra has shown the way and continues to train hard and ensures his only resolution, looking ahead is “to keep improving”. Already being talked about as the most written-about athlete in 2022, overtaking even Usain Bolt, Chopra believes in a new dawn for Indian sports. And what better way would it be than he himself setting the mark by aiming to go past the 90 m mark, something that had been nagging him all the way last year. Hopefully, interesting days are ahead and equally on notice would be the new Indian Olympic Association body, which is now headed by former athletics queen P.T. Usha, the first woman to come to this position in the Association’s history. Usha is used to challenges, but all this while on the tracks. This could be another stern test but of a different kind. But one must not forget, she is also a Member of Parliament and that only adds importance and perhaps weight to her role.