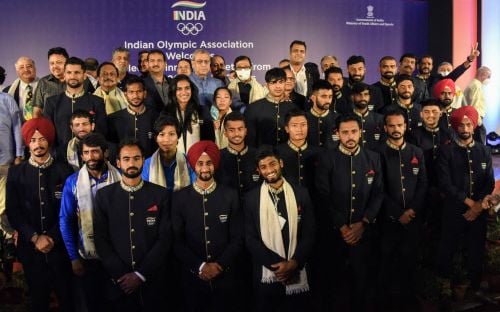 India's 75th Independence Day just passed by and with it the celebration. Just as well that the nation's big day came when everyone's mind was still fresh with what had happened a little over a week earlier! A celebration of another hue. The Tokyo Olympic Games marked independent India's best ever show on this biggest of biggest sports stage! It was a transformation that had to be experienced to be believed. Used to being fed with 'near miss' and 'sob' stories from the Olympics in earlier years with an exception here or there, Tokyo seemed all set for a repeat of the old essay. The start had looked ominous with the Shooters and the Archers missing the mark and each performer slowly but surely falling off one by one like nine pins. The march, it seemed, had truly begun of Indian competitors who had gone so near but yet far from the recognition line. And they were the initial lot of promising and tested sportspersons from the country on whom expectations of a grand start had been high.

Questions of why this should be happening to Indians began to gain momentum. When the smallest of small nations could find a hero to script stories of glory, why is a performer of similar class missing from one of the biggest populated lands, one may ask. Neighbouring China was flying high and signaled its status as a nation of high sporting deeds, by quickly taking a dominant place on the medals tally. Just when the sinking feeling had begun to corrode the thought process, came like a whiff of fresh air, Mirabhai Chanu to lift up the spirits with a silver medal in weightlifting. Boxer Lovlina Borgohain (bronze) followed, then badminton star P.V. Sindhu (bronze), Wrestler Ravikumar Dahiya (silver), Indian men's hockey team (bronze), and Wrestler Bajrang Punia (bronze). The icing on the cake then came in the form of a gold medal from Neeraj Chopra (athletics), the first-ever Indian to make this mark in this discipline in Olympic history. Needless to say, euphoria set in to sweep away all forebodings that had begun to set in! What a sight it was to behold as this sturdy young man ran in to hurl the spear, take a quick dive, and rise, and even before the javelin had dipped on to the earth risen with both hands high, face lit up and clear in his mind that he had achieved a milestone! Pity that the stadium had nobody to give him a standing ovation, the pandemic having ensured that emptiness surrounded a joyous happening!

The swing from nowhere to somewhere, has been India's story at the Tokyo Olympics and that is saying something. What stood out was also not just the seven medals won, the biggest haul thus far, one better than the previous best of 6 at the 2012 London Games but the way the Indian hockey teams men and women rose to the occasion. The sport which had for several editions of the Games ensured India's place in the gold medal section of the medals tally, returned to indicate a resurgence. After a 41 year gap, the men won a medal. The women may have missed a medal but reaching the semi-final for the first time was itself a high. “There is a future here” was the sentiment on every sports-loving Indian' mind about women's hockey in the aftermath of that stirring fight in the medal-deciding match. Equally creditable was the way Aditi Ashok carved her way in golf. She was almost there till the last before getting edged to fourth place. It was a numbing experience but this Bangalore lady's brave attempt was a shot in the arm of India's overall show. Also, it proved that India had reached there among the best with a kind of self-belief that speaks for a bright future.

None personified it better than Neeraj, the unassuming, humble, and dedicated army man from Haryana. He had the credentials and indeed anyone coming to the quadrennial Games has to be somebody special. A junior world champion, Asian and Commonwealth Games champion, well he was among the top four in the world when he left Indian shores for his campaign. But as they say pressure at the Olympics can be excruciating, so to say. Ask Simone Biles, the US gymnast, considered one of the sport's greatest athletes and one who was such a sensation winning four gold medals in Rio, four years ago. She just could not take it anymore in Tokyo. Shock and disbelief best described her Tokyo disaster. Then there was Neeraj's key rival Johannes Vetter. The German was expected to beat the entire field by a mile for such was his ability with the Javelin. With consistent throws of over 90 m he came famed but fumbled where Neeraj was a picture of confidence. The result was there for all to see as the Indian made history. Neeraj is now the most sought after name today in India!

Tokyo Games then brought medals and positives on which the nation should build a structure of a great sporting culture, where performance would be not just about soaking in the rare atmosphere or just winning medals but winning medals of the golden hue! True a postmortem will help in corrective steps and perhaps strengthen the resolve of those who missed out in lending class. The gains of Tokyo should not be lost but preserved, nurtured for bigger dreams. Paris 2024 may be near but the start has been made for a grand future. This must happen.