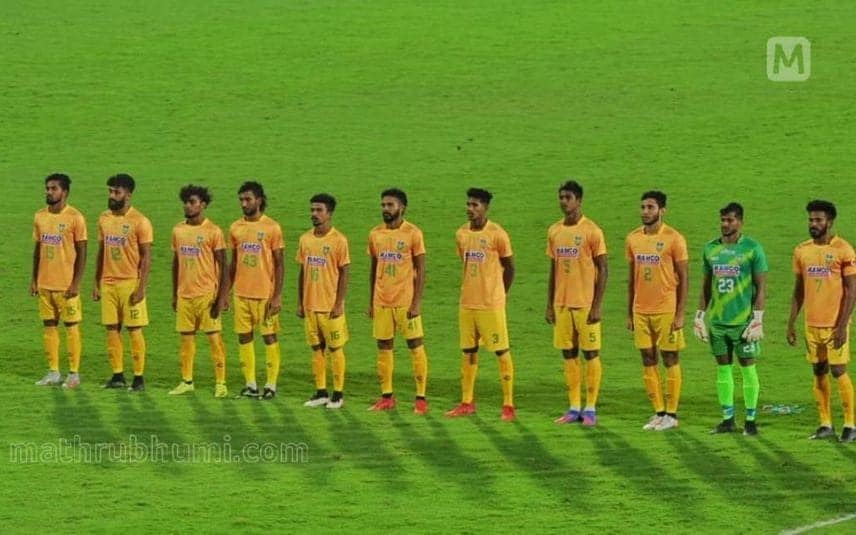 Just a week has passed since that momentous moment at the Payyanad stadium in Manjeri when host Kerala triumphed in the Santosh trophy national football championship at the expense of the 32-time winner Bengal in a pulsating final. But those glorious happenings still linger on in the minds of the football lovers of Kerala and, in particular, Malappuram. It was Kerala's seventh title-win overall but third time on home soil, something that had come about after a 29-year hiatus. What is more, the win had come in what is acknowledged as the football belt in Kerala! Malappuram is just that where football is such a universal subject, and it is in the fitness of things that the district hosting this event for the first time could straightaway witness scenes of jubilation and ecstasy in such measure never seen before. Undoubtedly it was a gala night of the football kind!

Surely football lovers in the whole state would have celebrated this moment. Why even the state chief minister Pinarayi Vijayan was quick to express his appreciation with a congratulatory message to the home team heroes. Kerala indeed lived up to its reputation as a foremost football-loving centre in the country! Not lagging behind was VPS Healthcare which did not waste time by honouring the victorious bunch with a Rs 1 crore award, in keeping with the promise that the company's chairman Shamseer Vayalil had made on the eve of the championship.

In many ways, it was a dream finish. Right from the time when Malappuram was picked as the host, the excitement had begun that build up to inspiring levels by the time the ball started rolling on the turf. Four years ago in Kolkata, Kerala had picked its sixth title, beating the host in what must have been a gut-wrenching final. It is never easy to win on Bengal turf, and so was this belief in Indian football, but Kerala achieved that even if it had to come through a penalty shootout. That history would repeat itself again in Malappuram was something few would have imagined and that too again through the penalties! And what is more, Kerala had to claw back from a goal down to force the issue. From deathly silence to bursting joy, the final swung like a pendulum. Mohammed Safnad was the saviour with his late equaliser to turn into an overnight hero that must make him take giant strides in his football career. The rest as they say was history. Like in Kolkata in 2018 so in Malappuram in 2022, Kerala charted the path to glory against the acknowledged giant of Indian football!

Yet for all this, if there was a touch of regret in the whole show, then it had to be with the look of the event itself. In the main the attempt to downsize the greatness of this championship or the importance of this coveted trophy that had stood the test of time for over 80 years. Ever heard of a national championship getting to lose its value? But that sadly is the scene in Indian football. It was English coach Bob Houghton, who was with the Indian team in the early millennium, who first expressed his disapproval of this event, calling it a waste of time and talent. Yes, when a vital member of the national squad gets injured playing in the national championship and that is too close to a major international event, the feelings cannot be different from Houghton's. But there could have been better ways of tackling the issue than attempting to devalue a championship that was always being looked upon with so much sense of pride and contentment. By ensuring no player from the I league or ISL took part and also bringing in age restrictions for most other members in the squad, the Santosh trophy championship it would seem had lost its earlier stature of competition of the best from each state or institution.

Not for a moment does this belittle the work of the lion-hearted heroes of the Kerala side who did wonders in Malappuram. Indeed Safnad and who can forget the brilliant Jesin, who ran riot against Karnataka with a 5-goal streak, have been the darlings of the home crowd just as I M Vijayan or Pappachan or Sharaf Ali for instance were in their heydays earlier. Similarly, there were grand performers in the other teams too but are we still not missing something. Experts say one best way would have been to have teams of the best mix of senior and junior players so that Championship continues to remain what it stands for and at the same provide a stage for those knocking on the fringes of professional football to exhibit their wares even as it provides an opportunity for the younger lot to gain notice. That would seem a lot more sensible.

In its best days, the Santosh trophy was for players something akin to getting national notice and to that extent getting the nod for a berth in the national team. The other fringe benefit is the likely call from major clubs, mostly set in Kolkata. Indeed careers must be allowed to grow. Even from this Malappuram performance some of the Kerala players in particular have the chance of getting picked by ISL and I League teams. Let the national championship regain its premier status and the Santosh trophy the cup of glory for the teams and players. If Malappuram-like spectacles had to replicate in other parts of the country surely then this is the way. Football in India needs professional circuits but for the sport to gain public trust and following, the role of a rejuvenated Santosh trophy cannot be understated.

Santosh Trophy: A great victory for Kerala in front of home crowd