The greatness of PK the footballer was that he did not leave his abilities behind when he decided to put a stop to his field career. The best from him was still to come as a Coach, Manager, Technical Director etc in the later phase of his life because he was so devoted to the sport. It is over a week now since that footballing great Pradip Kumar Banerjee, 'PK' or 'PK da' as he is fondly referred to by friends and admirers, passed away but memories will linger. If there was one truly devoted lover of Indian football, then it had to be PK.

At the age of 15 he had come into the competition ring of seniors in the National championship and the story of his deeds sort of got underway there. Rising up the ladder and coming into the Indian ranks the tale of his brilliant exploits began. But what has to be underscored most was that he was one key architect of that golden era when India was a football force in Asia and what is more an Asian champion after winning the gold in the 1962 Asian Games in Jakarta.

A great right winger, who could also move in as Centre forward at times, PK was a sight to behold, as C. R. Visswanathan, a former Vice President of the All India Football Federation and a man who was closely associated with Indian football for over 50 years, remembers.

Brilliant in dribbling and virtually unstoppable in his dash upfront that would leave his pursuers high and dry, his ability to cut into the left and unleash powerful left footers was what made him a most dangerous shooter of his times, Visswanathan remembers of those peak performing days of PK. 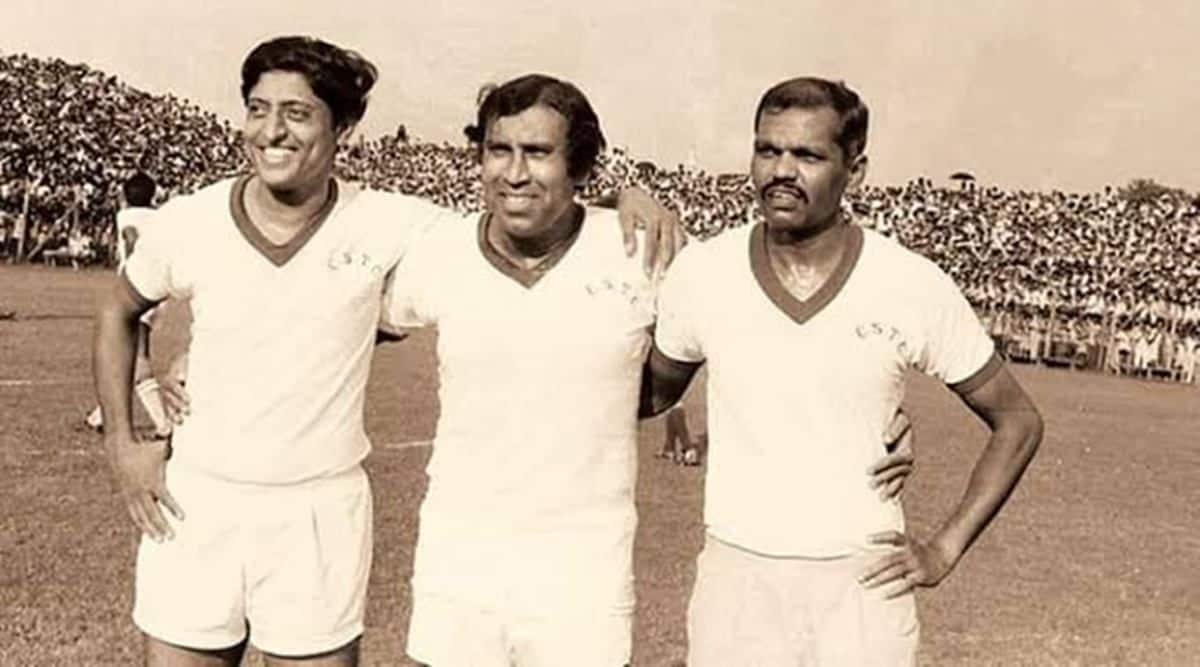 The greatness of PK the footballer was that he did not leave his abilities behind when he decided to put a stop to his field career. The best from him was still to come as a Coach, Manager, Technical Director etc in the later phase of his life because he was so devoted to the sport.

It would seem he had little else in life but serve football to the hilt. And sure he did, first with the Kolkata glamour clubs Mohun Bagan and East Bengal, the teams he could not be associated with as a player because Eastern Railway whom he represented had offered him a permanent job, something he needed at that young age.

What helped him out was his nature, his ability to come down to the player's level and convey what he wanted in clear terms just as he used to be with the ball in the rival half as a player. The ability to deliver as they say stood him out as a player and that was what separated him as an official later. Visswanathan remembers with a touch of pride his times with PK when the two had gone as officials of the Indian team, Manager and Coach, to the 1986 Merdeka tournament.

“We both hit off well and that helped” he recalled, particularly referring to a match against S. Korea which India won much against all odds. “The reception we received was something that is still fresh in my mind and felt proud for PK who had coached and got the best out of the players,” he said.

“Getting the best out of the players”, that is where PK perhaps excelled. Even when he was well into the fifties it was said in the coaching sessions he would go the extent of demonstrating the taking of free kicks with such precision that players half his age would be baffled. As they say some touches do not go away and for this great footballer from Bengal, the legs could speak just as eloquently as his words from mouth.

There was no question he was a great conversationalist. Seldom has media-men seen a repository of news as PK. In the eighties when Television had not made deep inroads into football grounds, newsmen, particularly the periodicals in the football crazy-Bengal would be after the coaches for “exclusive news” and this genial man would disappoint no one, for he would have plenty to talk on various aspects of the team and match!

There was this instance that come to mind of the 1987 Quilon Nationals (Santosh trophy) where I was present as representative of a leading English Daily. PK was seated in the press box and happily chatting away when an action in the middle, a goal from a player from the far side so stuck him for the range, beauty and accuracy that words shot out instantly from his mouth, “hey that is the kind of goal I had scored once in the Merdeka!!” Needless to say he had presented many a journalist present there a great headline for the next day papers!

As a Coach he had brought up several players to outstanding levels. I. M. Vijayan, Bhaichung Bhutia and the late Sathyan were all polished products of PK and how they shone for India! Indeed, it is doubtful if we have players of such calibre now in the Indian ranks and that seems a touch ironical considering how much the football scene has changed.

Yes, there is lot of money around, also opportunities for a good mix with foreign talents thanks to the ISL and the I-league but that apart the results have not been commensurate. Indeed, if there was one regret that this great lover of Indian football would have had was that he could not see India rise in football the way it had during his time on the green turf.

His was truly a different era. To be sure if there has to be a last line on this great man, then it would probably be best to describe him as a man “who gave everything for football and in turn football loved him till the last.”

ISL season to kick off today; Blasters to host East Bengal in Kochi