Two international events of significance are currently on to interest Indian sports fans. One is at home, at Mammalapuram to be precise, near Chennai where the Chess Olympiad is underway, and India’s brightest minds are up against the challenges of participants from over 180 countries. The other is the Commonwealth Games in Birmingham in England, where the physical skills in various sporting disciplines are on full display. Expectations are running high, but the biggest shock and disbelief for India in Birmingham is the absence of the man who would have risen to the occasion and given the greatest inspiration to his teammates.

Neeraj Chopra, the man with the golden arm with his superb showings, skipped the CWG due to an injury on the eve of the Games. That was the only way this gritty athlete could have been stopped from the field of action! Neeraj had just made a silver-medal finish in the World Championship held in Eugene in the US, and the process earned another first for India. Not since Anju Bobby George’s long jump bronze medal in the 2003 edition of the World Championship had an Indian come anywhere near the medals’ podium. Until it had to be Neeraj to settle that and what is more become the first Indian male to win a medal. 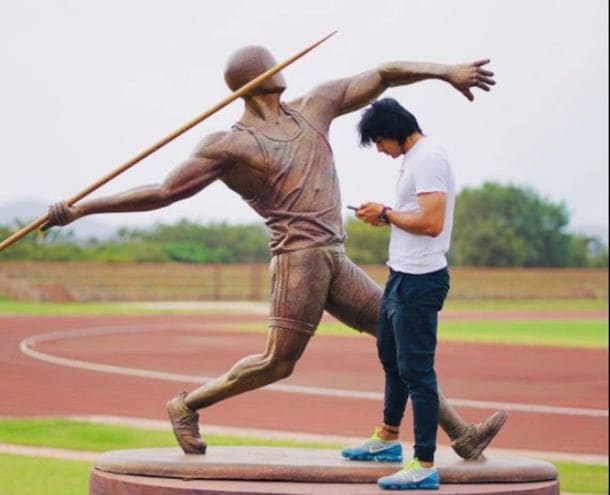 But sadly, the big moment in his career and Indian athletics had come at a huge price. Neeraj sustained, even if minor, a groin strain but enough to keep him out of Birmingham. The man known to give his all when it comes to heaving the spear, the young Indian has been a lesson on what it means to compete at the highest level. Even in this World championship, it was his fourth attempt that fetched him the throw for silver! Pressure can be debilitating, and Neeraj, after his Olympic success, did seem initially of losing his way, but that one throw of 88.13 m was enough.

The effort alone had even improved upon his gold-medal winning heave of 87.58 m in Tokyo! As they say, luck favours the brave, and Neeraj lived up to that to the delight of all Indian supporters. Yes, the gold medal eluded him as did the 90m mark, which has been his aim. But given his resolve, steely determination, and his strides can only go bigger just as he throws in the days to come. The man’s hunger has not subsided.

Remarkable has been the rise of this unassuming young athlete from Haryana. It is said he took to javelin for fun just as his key rival and world champion Anderson Peters! Chided for being overweight in his early years, Neeraj had found sports an ideal route, perhaps to satisfy his conscience that he was strong. Javelin caught his imagination and soon turned into a fascination.

The young boy grew up on healthy lines and before long found his arm doing enough to catch eyeballs around. From district-level meets, it started, and there was no stopping him thereafter as he rose. Destiny seemed to prepare him for something big. A silver medal at the Youth Olympics in Bangkok in 2014 set the path to his future on the international front. Many firsts as an Indian followed to embellish his shows, like the world junior title with a record in 2016, Asian games gold in 2018 and then the gold at the Commonwealth Games at Gold coast in Australia. That last effort made him at that point, the fourth Indian after Milkha Singh (1958), Krishna Poonia (2010) and Vikas Gowda (2014) to win a gold medal in the athletics event of this meet. In short, he had already accomplished what to many would have been a dream in an entire career.

Then the brightest of them all came at the Tokyo Olympics. None had till then seen an Indian win a gold medal in athletics in this prestigious Games. When Neeraj did, the euphoria was on expected lines, and the young sensation had become a household name instantly. For a nation that had witnessed the great P.T. Usha missing a medal by a whisker in the 1984 Olympics in Los Angeles and collectively groaned over the historic loss, this was the moment to rejoice in full over three decades later. And the legend herself was upfront in acknowledging the great show with her tweet to the champion, “realised my unfinished dream”.

If there was any fear that the weight of expectations would unnerve him then that was soon replaced with a new zeal for more! Like cricket maestro Sachin Tendulkar who kept getting better with every match, Neeraj too has exuded a similar promise. True Neeraj would have loved to grab the gold in Eugene and emulate the Norwegian legend Andreas Thorkildsen who had the honour of bagging the Olympic and World titles back in 2009. But the Grenadian Anderson was ahead with 90m plus efforts, the Indian is still to reach there, his best thus far being 89.94m achieved in the Stockholm Diamond League in June this year.

It is a great feeling to note that we have an Indian right at the top in an athletics event and always ready to knock at the highest door of recognition. Neeraj that way represents a new mindset, one that is out to give a fresh meaning to the term excellence. Participation with a purpose is his motto, and if Tokyo brought that to the fore then Eugene most recently underscored his hunger for more. A tale of excellence, that is Neeraj Chopra for you!

Neeraj Chopra ruled out of Commonwealth Games due to groin injury

We are proud of you: PM Modi congratulates Neeraj Chopra