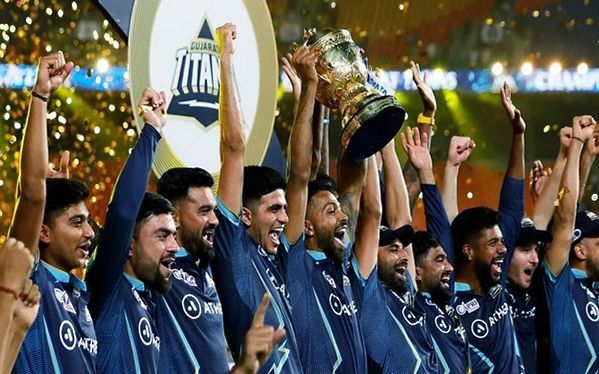 Gujarat Titans squad celebrates with the IPL trophy I ANI

With over a lakh in attendance at the Narendra Modi stadium in Ahmedabad, the largest cricket facility in the world, the IPL 2022 ended on that Sunday night on a tumultuous note. Not for nothing do they say that IPL is the biggest spectacle in the cricketing world. Such public involvement and outpouring of popular sentiments seemed a rare sight in sports and cricket’s proof of being the most looked forward to sporting pastime in India needed no further explanation. Despite the late hour by the time the contest ended, the stadium was a centre point of high flowing energy. Young and old alike enjoyed every bit of the action and that anyway had been the pattern right through the duration of the IPL matches every season. Additionally, the contest provided the fitting climax for the occasion with a newcomer cornering glory and what is more, the home favourite itself _Gujarat Titans _ with the next best being the team which had won the inaugural year’s competition back in 2008_Rajasthan Royals! For IPL, there could not have been a better advertisement.

Indeed, how time has flown! Not very long ago, a good cricketing moment involved a dour contest between the bat and the ball where time and overs were no constraints. Runs were important, but even more was the batsman’s skill of keeping the wicket intact and frustrating the rival with, as they say, a broad bat and an impregnable defence against the skills and wiles of the bowlers, both spinners and pacemen. Old-timers would still talk of the time when say, a Barrington, the English great, would spend hours at the crease, not progressing much on runs as much as he would frustrate the bowlers. Or of a bowler like our own master spinner Babu Nadkarni who would peg away to a line and length bowling maiden overs at a stretch. Those were some sights for joy in the times when cricket action was all about the happenings in Tests. How much the sport has evolved! From a rare six or a boundary to break the tedium as it seemed to them, the twenty-over version of the sport is now all about non-stop excitement with sixes and fours! Forget copybook styles, it is all about power-hitting where the batsman’s ability was also in his switching stances to come up with extraordinary shots _ the reverse sweeps and pulls, scoops to or sometimes over the fine-leg fence not to speak of the thunderous hits to the straight field! The theme is to make runs at apace because the balls to be faced are few, and the need is to raise a challenging total. Oh yes, the sport has changed and changed to make everyone in the sports-minded audience, not just the cricket-initiated, hooked to the action.

Fifteen seasons of the IPL have gone by and, if anything each has been one step better than the previous. From this season, in addition, the League had been enlarged to ten teams and had it been normal times without the restrictions brought about by the Coronavirus, the whole of the country would have had a share of the live-action with matches in various venues. How much the fans were eager to be there on the spot can be gauged from the huge response at the Eden Gardens, which had hosted the playoffs. Until then, the matches were in Mumbai and Pune. Side by side with the growing interest in instant cricket, the IPL has also been a great revenue source for the cricket board. For the players too, the financial package has been stupendous. Imagine young cricketers, fresh to this big stage and yearning to make an impression, getting assured of sums that would be beyond their dreams! But that is the truth. Talents have a value, and IPL, in a way has shown the way.

The biggest gain still is cricket as such for each season, India’s pool of high talent gets widened with fresh additions, and expectations grow high for the country’s performance chart in the various international events. In fact, this year, that way is something special with the ICC Twenty20 World Cup scheduled in the latter part. To that extent, the IPL has proved a fine selection exercise in some way. Fresh names have surfaced and even become heroes already. How many of those bright cricketing talents will finally make it even more memorable only time will tell. On the other hand, for some of the experienced players, the few who virtually walk into the team, this season has been a touch embarrassing. Players like Virat Kohli and Rohit Sharma would wish to forget their show post haste as they set their sights ahead. But for someone like Hardik Pandya, it was redemption time overall. Pitchforked to take on the captain’s role for the debutant team Gujarat titans, this all-rounder, who had lately got bogged down with injuries and perhaps even comparisons with the legend Kapil Dev, truly came out with flying colours. It can be said he reserved his best for the final, shining both with the bat and ball. Experts believe there is much that Hardik could do with his newfound enthusiasm, on-field sharpness and leadership quality as he gets ready for national duty. The exciting player has himself set his goal _ to win the world cup for India! Perhaps it would be right to state that the IPL had set the tone for what is to come ahead.