Even Lionel Messi can have a fall!

For the first time in 753 appearances for Barcelona this Argentine star had the mortification of facing the marching orders. 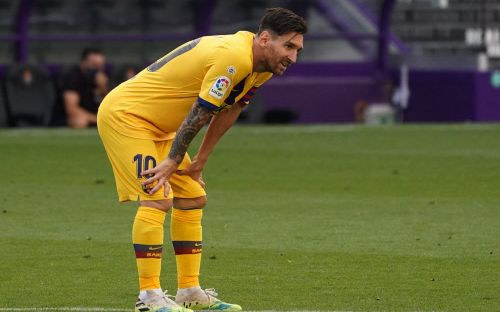 There is this interesting anecdote about tennis icon Boris Becker. Back in 1987 when he lost as defending champion in the second round of the Wimbledon championship, the fans were naturally in for a shock and disbelief and even as everyone could reconcile to what happened, the German hero came up with an amusing quote, “Nobody died. I only lost a match. Nothing more”!

This incident came to mind after what happened to another celebrity, the Argentine football legend, Lionel Messi the other day. Messi faced a similar situation in that he did not lose a match but received marching orders for a wanton foul he had meted out to a rival player. Fans the world over were stupefied on what they heard and read in the media of their celebrated hero. Indeed, Messi too could well have said in a similar vein, “Nobody died. I have only been Red carded. Nothing more”!

Maybe it is rare that a player of Messi's stature could be charged with a serious foul. It is more likely that one heard it the other way that Messi was at the receiving end of all trying to spoil his efforts on the turf and getting punished in different ways. What Messi faced in that Spanish super cup final against Athletic Bilbao was a rare moment when his indiscretion, off the ball, of taking a swipe against the rival team's Asier Villalibre was considered blatant enough to warrant the deadly Red card! For the first time in 753 appearances for Barcelona this Argentine star had the mortification of facing the marching orders.

He has been playing for the club for 17 years now. Not a small happening that way. For, experts viewing the seriousness of the foul even predicted that it could be a long lay off for this world famous professional. Ultimately though he had to sit out for two matches. And as is his wont, returned to his team after the two-match suspension to once again exhibit his touch to help Barcelona win a match in the Copa del Rey tournament with a goal and an assist.

That black day thus was quickly forgotten. Atleast Messi seemed to form the way he had sparkled in that pre-quarterfinal match to help Barcelona come back from a 0-1 deficit and post a win. Not just that. Reports said that he had stayed back in the ground post-match, even after his team-mates had left, to mingle with the losing team's youth side. The touch of humility for which he is known, was very much evident. In any case this huge talent from Rosario had always had only one thing to show, his passion for football. It is this that had seen him scale new highs from his childhood days as a prodigy more on the lines of his famed senior Diego Maradona.

True he had his failings, like in 2005 when in his debut international match against Hungary, earned a Red card to stun his supporters. That was not all, again in 2019 against Chile in the Copa America he found himself facing a Red card punishment. Those were the only two blots before this Super Cup event added one more which he wished he had not considered the clean plate he had till then maintained playing for Barcelona.

But human feelings are things that can at times go out of control at the most inopportune time. Recall what happened to Zinedine Zidane in the 2006 World Cup final. The hero of France only two editions earlier, Zidane lost his mind in fit of rage and head-butted Italy's Marco Materazzi in the final and went out in a heap of shame. Not that this incident took away any merit from this great French talent who is considered one of most successful managers now and currently coaches Real Madrid.

The great Maradona too had met this fate in the 1982 world cup against Brazil. All this then is part of the big sport but this hardly masks the great deeds that these wonderful footballers have had in their career. However, it is argued in some quarters that when it comes to Messi there apparently is more to it than mere on-field frustration. Barcelona was at a receiving end in this key match and with time running out, Messi found himself done in by the opposition's tactics of attempting to bottle him up.

Then again it is also said that his relations with the Club where he had grown up had undergone a downswing. In fact, speculations were already strong after Messi's name was linked with Manchester City and Paris Saint-Germain FC. Things are still to crystallize but if he does move, then that will once again be another big happening in world club football affairs!

Indeed, at 33 years, Messi is not getting any younger. He has unrealised dreams still, the biggest being that of carrying Argentina to another World Cup triumph! Can still gear up to this challenge. That will decide if he can be spoken in the same breath as Marodana. Not more a moment is one suggesting that Messi is any degree less brilliant. The array of recognitions including the record six time Ballon dÓr awards and still in the race for another not to forget his record six European Golden shoes, Messi that way sets himself aside from everyone else to be considered one of the finest footballers of all times. Still the true stamp of greatness has to come from a World Cup success. Why it eluded him, is the mystery!

Football is always a sport that evokes rousing ...