Kohli and his men are down but not out! 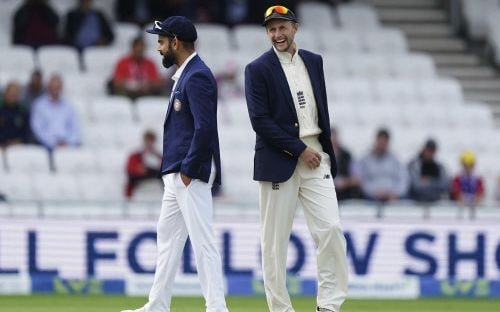 A crushing defeat for India in the Cricket Test at Leeds. Not that it was unexpected particularly after the first day's catastrophe, getting bundled out for a two-digit score and England settling down well in reply. After the horrors of Adelaide in the away series against Australia late in December last year when India sank to its lowest Test total (36), fears at least briefly of another horrendous happening seemed on the horizon. Only that was avoided but the defeat became almost a certainty on the second day itself after England raised an imposing lead. The question was how far India would stretch or whether the team had the capability to come up with another turnaround. They had done that in the same Australia series to record a sensational 2-1 series win, which had the cricket world sit up in admiration. But as the popular phrase goes, one swallow does not make a summer. In England what had amazingly happened was that this defeat had struck after only a few days earlier, India had beaten the host in style in the Lord's Test. Normally one would have expected India from there to play a dominant role after the success and for England to make a brave attempt to inject a fight. But roles reversed dramatically, the hunter became the hunted, and suffice to state, all the batting lows of Indian cricketers surfaced. The inability to cling on against a relentless bowling effort proved the game-changer.

As always the social media was flooded with reactions and trolls. There was this inventive thinking of one disgruntled fan who expressed his feeling in a sarcastic way that when the side's best batsmen could not stand up to the pressure what can the rest do! He was referring to Md Shami and Bumrah !! These two bowlers, as we know, were in the centre of the action with their remarkable batting and resilience that set the path for India's Lords win. That then was the reflection of the surprise batting brittleness of the top order. Particularly disappointing in this was the form of skipper Virat Kohli, normally known for his free-flowing batting abilities. His struggle to get to terms with his wonted skills underlined the woes of India's main batsmen in a way. Yet when Kohli and Cheteshwar Pujara struck a timely good partnership in Leeds, as India earnestly made a bid to erase off the first innings backlog and set aside all the earlier uncertainties that characterised the batting display, India seemed to creep up even if odds were still stacked against it. But that was a short dream that harshly ended before lunch on the fourth day with eight wickets going off with the addition of just 68 runs. That in a nutshell was India's agonising display in the Test.

What this Test as also the earlier ones brought to the fore was the way the two captains handled the pressure. Joe Root was calm personified on the field and when it came to batting his aggressive intent was clear and his contribution was unparalleled. With a century in each of the Test played thus far, Root had achieved a milestone that richly deserved the approbation he had been receiving. Not that his contribution alone has made things easy for the host but the team was never short of inspiration from its skipper. This is where Kohli for a change suffered. His batting had touched a worrying low and his acts on the field, the show of aggression had been getting all the good and bad notes in the media. A comparative statistics of the two captains portray the depth to which Kohli had plunged in terms of his batting skills. Kohli had averaged less than 24 in Tests since the start of 2020. It was in 2019 that he had scored his last century, his 27th and at that time, Root had only 16 centuries to his name. Since then the England skipper had added seven more tons to his tally to reach 23 and what is more, he still looked hungry for more! And that should be no good news for India, particularly after the debacle in Leeds. This series could well see him set a few more landmark moments in his career even as sets sight on making it even more memorable with a series win.

Indeed with two more Tests to go, there are interesting prospects ahead. One thing is clear after the way India slipped to defeat in Leeds that there is nothing like a favourite in this sport of cricket. Cricket's unpredictability stands out and that is why one cannot rule out India straightaway. Like one bad day in office, this reverse should pass and open up for better times ahead. At least Kohli believed or had high faith in his own abilities and his men. Correct a few niggles was what he had in mind as he confidently declared that the fight was on. Indeed for a side which had shown its bright side once, there was no reason why a matching display could not be repeated again. It had to be just a question of time before a player like Kohli, so highly rated, got going. For the moment Md Siraj will rue that his one-zero gesture to a section of the crowd in the Leeds stadium who had mocked him with a 'what is the score? ' taunt had gone awry! Perhaps he would have a better reply when the opportunity comes next!