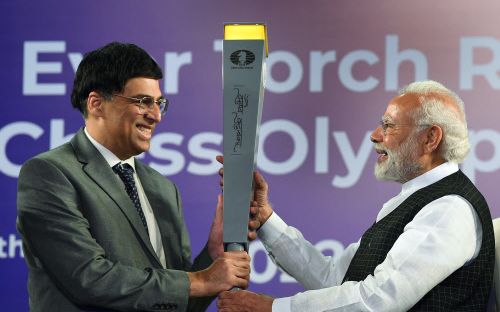 Mahabalipuram, or Mammalapuram as it is renamed now, is best known for being a UNESCO heritage site. A tourist spot famous for the beach-side scenery, temple architecture and more importantly a place where tourists storm to from the madding crowds of the city. Tranquillity is what strikes one watching the never-ending waves rolling on and creeping onto the shores. Time stops, or it would seem, watching nature’s bounty. Soon, this tourist-loving heritage spot will come into prominence for another reason when it enters the world sports map with the conduct of the Chess Olympiad! In less than ten days, over 2000 best brains from 187 countries, tuned to exhibit excellence of the highest order in this sport of chess, will converge in this scenic venue for what is to be one of the biggest sporting programmes ever to be held in the country. Hosting major sporting events cannot be said to be new to India. From Asian Games (twice) to Commonwealth Games, the country has had its share of international attention. But what is in store in this port town will be the biggest of them all, thanks to the FIDE, the world chess body which gave the nod, the All India Chess Federation for taking it up and the Tamil Nadu Government for coming forward with a handsome financial backing.

It is amazing how much chess has grown in this country in the last few decades. Though history would talk of chess having its origin in India, it was in Europe that the sport earned a mass base. The Russian and Ukraine belt was known for some of the big names in the sport. Other countries in the continent too followed. In Asia, China has a major presence. Perhaps the one significant factor that helped the sport receive a massive boost in India has to be the rise of Vishwanathan Anand. Who would have thought that a six-year-old, who learnt the rudiments of this 64-square sport from his mother while in Manila -- where his father was posted for a while as a Railway Consultant -- would rise to become a giant in the sport!

His interest in him grew there, and the bright youngster did not take long to learn the intricacies of the sport too. The rest, as they say, is now history. From Asian junior champion, world junior champion and several other firsts, the chess genius kept developing his talent, hounding players all around the globe and as destiny would have it by 2000, he had become a world champion for the first time. Imagine the elation of an Indian rising on to become a world champion!

Not a surprise then that Anand, a five-time world champion, rose to become one of India’s popular sports icons. Perhaps it is fair to say he is like what Roger Federer is to tennis, one with an instant appeal. There is always a feeling among sports fans to rate Federer as the Greatest tennis legend. Maybe Anand too could take that pedestal in chess for such was his following in India and indeed abroad. Well-read and articulate, Anand was a hit with the younger generation, and when the 2013 world championship was announced, where he had to defend his title against the Norwegian challenger Magnus Carlsen, Indian chess aficionados were blessed that the event took place in India, in Chennai in fact. As we know, Carlsen spoilt the party by beating the Indian great, but that event singularly did enough to give the sport a boost like never before. Tamil Nadu, in particular, found the sport reaching a new high with the number of Grand Masters growing. It was in the fitness of things that Anand, the first GM of the country and one from this southern metropolis could thereafter be a witness to a surge in the number of GMs in the country (74 now) and in Tamil Nadu itself. What is more, the country’s youngest GM hails from Tamil Nadu! R. Praggnanandha was just 12 years when he became a GM, the second youngest in the world. Anand had earned this honour when he was 18 years.

Just as well that the Olympiad is being held in the country when the sport is so active to regularly catch space in the media, thanks either to Anand’s own engagements across the chessboard or the classy play of others like Praggnanandha himself, for instance. The Chennai lad grabbed headlines recently after he spectacularly beat the reigning world champion, Carlsen, in an online event, his second gigantic effort over the Norwegian great!

The Olympiad was originally scheduled in Minsk, Belarus but later shifted to Moscow. The Russia-Ukraine war meant an alternative venue had to be found, and it was here that India pitched in. Yet again, it required the charm of Anand, a mentor for the Indian players, to ensure the event came to Chennai. Anand’s proximity with the International Chess Federation President, Arkady Dvorkovich, worked and here we are at the doorsteps of another historic sporting moment in India. Chess in India could not have asked for anything more. In 2020 when the event went online, India and Russia had jointly bagged the gold. That was India’s best show to date. So, what will it be at Mammalapuram? Pointers are bright, more so with Russia and China not participating!

Kohli and his men are down but not out!